The Campus Eye • May 9, 2022 • https://thecampuseye.com/7894/sports/softball-sets-record-for-wins-in-a-single-season-with-sweep-of-m-state/ 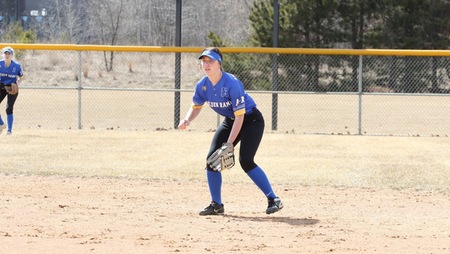 Anoka-Ramsey hit the road for their second-to-last series of the regular season and walked away from Fergus Falls with a sweep of the Spartans. The #9 ranked Golden Rams were able to hold the Spartans scoreless and pour on the runs in later frames, despite being down a few typical starters once again on Thursday. The Golden Rams win streak is now at four games, and they’ll look to keep that streak rolling into the postseason.

In the first game, Anoka-Ramsey jumped out to an early lead, but the Spartans were able to keep the score within reach in the first couple of frames, as the Golden Rams only led 3-0 after the second inning. However, the Golden Rams would score 5 runs in the third, ultimately putting this one out of reach. Lyla Galli was the starting pitcher who picked up the win, as she struck out ten while allowing just two hits. Galli improves to 9-4 on the year following the shutout win. The Golden Rams bats were hot all afternoon, with numerous top-notch performances. Emma Bright continued her great streak of games, as she was 3-4 with a triple, three RBIs, and two stolen bases. Marissa Kerry was 3-4 with a double and a triple. Sunny Strait went 3-5 with a double and had three RBIs. McKenna Packard was 3-4 with three RBIs and two stolen bases. Brooke Beberg was 3-4 with two RBIs, and Maddie Bottineau was also 3-4. The Golden Rams went on to easily defeat the Spartans 19-0 in five innings in game one.

Game two was much of the same for the Golden Rams, but they had a new pitcher, as Maddie Bottineau started her first game of the year with regular pitchers Sunny Strait and Molly Gross resting. Bottineau pitched two innings on Wednesday in relief, but it was her first start of the year. The offense had her back in this game, as they scored early and kept piling on runs throughout the game. Bottineau was effective in her first start of the year, as she was able to record a shutout while striking out seven and allowing just two hits. She is now 1-0 on the year. From the plate, many of the usual suspects stayed hot. Emma Bright was a perfect 3-3 with three stolen bases. Lyla Galli was 3-4 with a double, home run, and four RBIs. Sunny Strait was 3-4 with two doubles and two RBIs. McKenna Packard was 3-4 with two RBIs and a stolen base. Maddie Bottineau was also 3-4 with a triple and an RBI.

It was a quick doubleheader on Thursday, and the Golden Rams now have just one remaining doubleheader in the regular season. As they look towards the playoffs, Head Coach Dave Alto was once again impressed by his team, saying that it was “another great team effort” and that he was impressed to see how “many players stepped up” to help them achieve the win. The Golden Rams have now set a new school record for most wins in a softball season with a record of 29-12.

The Golden Rams will wrap up their 2022 regular season schedule on Monday, May 9th, as they travel to Worthington to take on Minnesota West in a rescheduled doubleheader from earlier in the season.