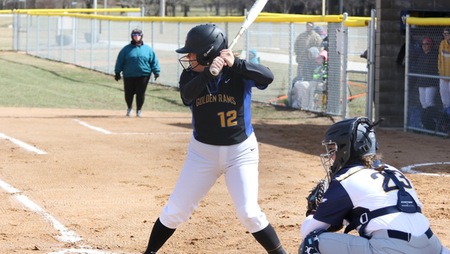 The #9 ranked Golden Rams bounced back from their Tuesday setback by sweeping the Warriors of Ridgewater College, outscoring them 43-2 over two games. The Golden Rams got excellent pitching from their starters and from reliever Maddie Bottineau. The entire Golden Rams team was hot at the plate, putting the ball in play or drawing a walk nearly every at bat. The Golden Rams have started a new win streak now, which they will look to keep rolling on Thursday as they travel to Fergus Falls to take on M-State.

Anoka-Ramsey jumped out to an early lead, with a score of 11-0 by the end of the 2nd inning. The Golden Rams continued to dominate, building on their lead each and every inning. Lyla Galli worked quickly and effectively, sending the batters down in order early and often. She struck out seven while allowing just one hit. With the win, Lyla Galli is now 8-4 on the year. At the plate, nearly every Golden Rams player in the game got a hit or drew a walk. Marissa Kerry was 3-3, with a homer and four RBIs. Mckenna Packard was 3-4 with a double and two RBIs. Sunny Strait was 2-4 with a double and two RBIs. The Golden Rams wrapped up game one early, defeating the Warriors 21-1 in five innings.

The second game was much of the same for the Golden Rams. They racked up several runs early, and didn’t let up through the remainder of the game. Anoka-Ramsey scored eleven runs in the 1st and six runs in the 2nd to lead by 17 after two. Sunny Strait was the starting pitcher who recorded the win, as she struck out four while allowing three hits in two innings of work. Strait moves to 8-4 with the win. Infielder Maddie Bottineau pitched for the first time this year, and she pitched extremely well as she struck out three and allowed just two hits in two innings of work. From the plate, Janelle Labey was 3-3 with a double and an RBI. Mckenna Packard was 3-3 with two RBIs. Marissa Kerry was 2-3 with an RBI. Sunny Strait was also 1-1 with a homer, three RBIs, and two walks drawn. The final score for game two was 22-1 Golden Rams, as they took down Ridgewater via the run rule in five innings.

It was a great way for the Golden Rams to bounce back after some tough losses on Tuesday. It was also encouraging to see the entirety of the team play well, even down some typical starters due to final exams and other reasons. With their wins, the Golden Rams are now 27-12 on the season. “We played really well,” Head Coach Dave Alito said after the games. “Pitching, hitting, and defense all performed at a high-level. It was great to see contributions from the entire team.”

That concludes the Golden Rams home schedule for the 2022 season, unless they get the opportunity to host the regional tournament. They are next set to travel to Fergus Falls on Thursday, May 5th to take on M-State in a doubleheader.