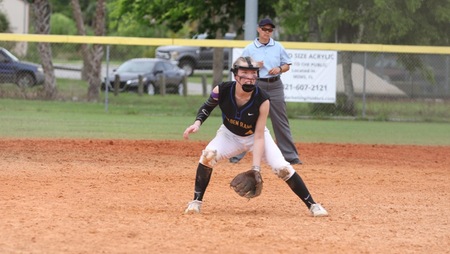 The Golden Rams triumphed over the Rochester Community & Technical College Yellowjackets in a doubleheader on Friday, earning a 2-0 road sweep. The Golden Rams are now 3-1 in their last four games after splitting their doubleheader with #8 St. Cloud TCC on Monday.

The first game of the day got off to a quick start, as the Golden Rams added four runs in the first inning while RCTC was held to putting just one on the board. After a scoreless second and third inning, Anoka-Ramsey would go on to score four more runs in the fourth inning, blowing the game open. Molly Gross was the starting pitcher who recorded the win, as she struck out seven while allowing just four hits. Molly Gross is now 6-3 on the year after the win. At the plate, the Golden Rams had contributions from a few different players. Lyla Galli was 2-3 with a triple and four RBIs. Maddie Bottineau was 2-3 with a double and two RBIs. Brooke Beberg was 1-1 with an RBI and two walks drawn. The team finished game one with a 9-1 win in five innings.

After a scoreless first inning of the second game, both teams found some rhythm, but the Golden Rams ultimately dominated with virtually every player unstoppable at the plate. The Golden Rams started their scoring spree with three runs in the second, and would add three more in the 3rd, and then six more in the 5th and 6th. The starting pitcher was Sunny Strait and although she ultimately recorded the win, she allowed seven hits without recording a strikeout. She improves to 5-3 on the year with the win. Luka Galli pitched the final three innings in relief, allowing ten hits while also recording zero strikeouts. The Golden Rams struggled mightily on defense in this game, but their bats were able to carry them to victory, as they were a combined 18-39 at the plate while drawing nine walks as a team. The team as a whole batted well, with standouts including Emma Bright, who was 2-5 with a home run and five RBIs, and Lyla Galli who stayed hot, going 2-5 with a home run and two RBIs. Madison Segler was 3-6, with three doubles and two RBIs. McKenna Packard was 4-4 with a double and four RBIs. Brooke Beberg was also 2-2 with a double, while drawing four walks. The final score in game two was 22-12 in favor of Anoka-Ramsey.

Overall, it was a great day offensively for the Golden Rams, as they scored 31 runs in two games, but the defensive effort in game two was a bit rough. The wins are what matters though, and the Golden Rams picked up two to improve to 15-10 on the year. Coach Dave Alto said that overall the team “played well the first game, and hit really well the second game,” but he was not thrilled with the team’s defensive performance in the second game, saying that it’s something that they will continue to work on and get better at. The Golden Rams were set to play an away doubleheader at Riverland Community College on Saturday, April 16th, but it has been postponed. A makeup date is still TBD.