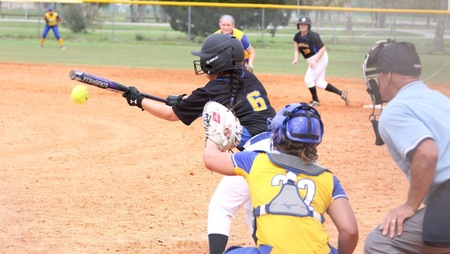 Anoka-Ramsey bounced back nicely on Saturday, as they swept their two games at the Rochester Crossover Tournament, handling Rochester Community and Technical College (RCTC) and MN West with ease.

The first matchup saw the Golden Rams take on the tournament hosts, RCTC. The Golden Rams jumped out to an early lead, as they piled up six runs by the end of the second, before exploding for five more runs in the third inning. Starting pitcher Molly Gross continued her amazing string of games, striking out six while allowing just one hit, earning herself the win and improving to 5-2 on the year. Molly Gross has now won five of her last six starts, and four in a row, including 27 straight scoreless innings. At the plate, Lyla Galli was 2-3 with another home run and three RBIs. Madison Segler was 2-3, recording her first home run of the year. Emma Bright was 2-3 with four stolen bases. Sunny Strait was also 1-1 with two RBIs and two walks drawn. The Golden Rams went on to defeat the hosting Yellow Jackets 11-0 in five innings. With their win, the Golden Rams improved to 11-9 on the season.

The second matchup saw Anoka-Ramsey take on MN West, where they stayed extremely hot at the plate, racking up nine runs in the first two innings and never allowing MN West to close the gap. Starting pitcher Lyla Galli played well, striking out five while allowing just one run. She improves to 3-4 on the year with the win. From the plate, Madison Segler was effective again, as she was 2-2, recording another home run and bringing in three runs. Sunny Strait was 2-2 with a home run and two RBIs. Hailey Babcock was 3-3 with a double and two RBIs. Molly Gross was also 2-2 with two RBIs. The Golden Rams would cruise to victory, defeating the Lady Jays 12-1 in five innings.

After sweeping their Saturday games, the Golden Rams are now 12-9 on the year, and are looking forward to a big matchup at home on Tuesday. Head Coach Dave Alto was impressed with the team’s performance. “We played very well today in all phases of the game.” He noted that they were “excited to begin division play, starting on Tuesday at home against perennial power Saint Cloud CTC”.

The Golden Rams are scheduled to play the Cyclones of St. Cloud CTC on Tuesday, April 5th, in a doubleheader at the Golden Rams home field in Cambridge, Minnesota. Game one is set for 3:00 PM.