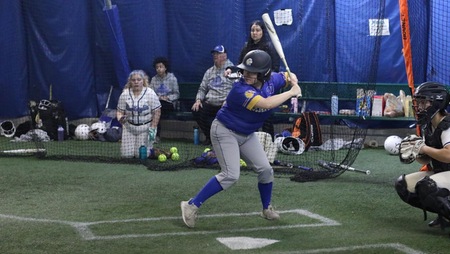 After a tough Monday on the Softball field against two great teams, the Golden Rams rebounded nicely on Tuesday, splitting their two games.

Their first game saw them take on Rowan College South Jersey – Gloucester for the third time. Rowan is ranked the #5 school in the country in softball, and the Golden Rams were able to beat them twice already in Florida. The Golden Rams took a 2-1 lead in the fourth inning, but were unable to hold off a late surge from Rowan, as they scored 4 times in the final two innings.

Starting pitcher Lyla Galli pitched well for the majority of the game, recording one strikeout while allowing ten hits. She moves to 1-3 on the year with the loss. From the plate, Hailey Babcock impressed once again, as she was 3-4 with a double and a stolen base. Lyla Galli was 2-4 with a double. Brooke Weyand was also 2-3 at the plate.

While the Golden Rams played well, they ultimately couldn’t withstand the late surge by Rowan, falling by a final score of 5-3.

Head coach Dave Alto was still impressed by his squad, saying that it was “a great softball game by both teams. Unfortunately, we came out on the short end this time. All three games with Rowan came down to the seventh inning with us winning two out of three. I am very happy that we beat the number five team in the country two times this trip.” With their loss to Rowan, the Golden Rams moved to 3-7 on the year.

The second game on Tuesday, the Golden Rams final game in Florida, took on a conference opponent in M-State Fergus Falls. The Golden Rams worked quickly in this one, as they were able to pile on nine runs in the second inning alone, and never looked back. Molly Gross was 3-3 at the plate. Sunny Strait was 1-2, recording a double. Lyla Galli had 3 RBIs while going 2-2 at the plate. Kenna Packard had a great game as well, going 2-2 at the plate, scoring two runs while also stealing two bases. Molly Gross pitched effectively as well, striking out eight while only allowing one hit. She moves to 1-2 on the year with the W. Sunny Strait wrapped up the game, recording one strikeout and allowing one hit in 1.1 innings.

It was a great way to close the trip for the Golden Rams. Overall, the Golden Rams finished with a 4-5 record in Florida, and 4-7 on the season despite playing some very tough competition. Coach Alto said, “Overall, we had a great trip against some quality competition. We got better and that was our goal.” The experience will come in handy the rest of the season. The Golden Rams are flying back to Minnesota and will next be in action on Tuesday, March 22nd at the M Health Fairview Dome, where they are scheduled to play six games over two days.