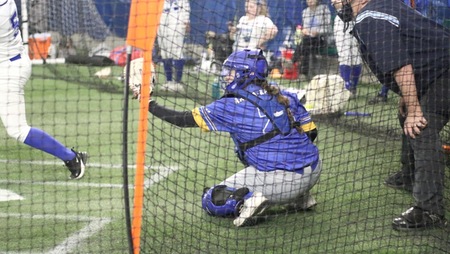 After more games were canceled due to rain on Saturday, the Golden Rams returned to the field on Sunday with mixed results, recording both a win and a loss.

Their first game saw them take on Rowan College – Gloucester in a rematch from Friday. The Golden Rams won on Friday 9-8 in eight innings. The Golden Rams once again dominated throughout the early innings, with Hailey Babcock going 3-4, recording a double and scoring two runs. Molly Gross was 2-4 at the plate and had three RBIs. Marissa Kerry also scored twice and McKenna Packard drew three walks. After four innings the Golden Rams led 6-2, but Rowan mounted an impressive comeback to tie the game, scoring four runs in the sixth. Anoka-Ramsey would answer in the 7th off a sacrifice fly by Brooke Weyand, and then Sunny Strait closed it on the mound, shutting the door on Rowan’s comeback attempt. Molly Gross was the starting pitcher and struck out two while allowing six hits before giving way to Sunny Strait, who pitched two innings and earned the win, moving to 2-1 on the season.

Coach Dave Alto said “we got better in all phases of the game” during the win. After defeating Rowan 7-6 on Sunday, the Golden Rams improved to 3-3 on the year.

In the second game, the Golden Rams played Iowa Central Community College, who they were scheduled to play on Saturday. It was a tough game for the Golden Rams as they struggled to get anything going behind the plate. The Golden Rams had just 2 hits in the game, a single by Emma Bright and a double by Sunny Strait. Their lone run was also scored by Emma Bright. Starting pitcher Sunny Strait struck out two while allowing eleven hits. Strait took the loss in this game, falling to 2-2 on the year.

Despite the tough game to end the day, Coach Dave Alto is still proud of his team, saying “the sky is the limit”. With this loss, the Golden Rams fell to 3-4 on the year.

After Sunday’s games, the Golden Rams moved to 3-2 in Florida and 3-4 on the year. The Golden Rams are scheduled to play at three games on Monday in Florida, pending the weather.