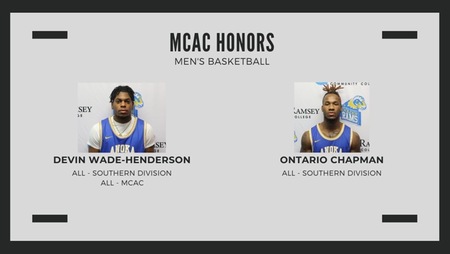 Anoka-Ramsey sophomores Devin Wade-Henderson and Ontario Chapman earned MCAC honors for their performance during the 2021-2022 season.

Wade-Henderson led Anoka-Ramsey in scoring (13.4 points), and rebounding (9.7), but in MCAC games those averages increased to 17.0 points and 11.9 rebounds.  His rebound average was good for fourth in the MCAC.  He had two games with over 20 rebounds including 28 against Western Tech while also adding 31 points in that game.

Chapman was second on the Golden Rams in scoring (12.9 points), and second in rebounds (7.1) while also knocking down 23 three-point attempts for the season.