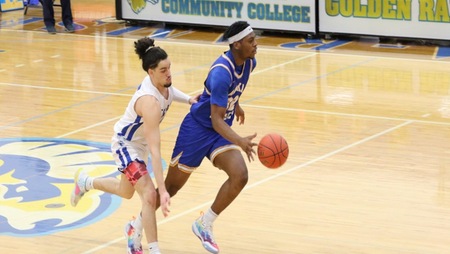 The Anoka-Ramsey Men’s Basketball team entered the 2022 NJCAA Region XIII Tournament as the #4 seed from the Southern Division, but made a run to the championship game before falling to Riverland 79-67.

The Golden Rams defeated the #1 seed from the North Rainy River in a two overtime thriller 76-75 on Friday night in the quarterfinals, then dispatched rival Rochester – the #2 seed from the South – 62-51 in the semifinals on Saturday afternoon.

In Friday’s quarterfinal, Anoka-Ramsey trailed by 13 at halftime and by 16 early in the second half before a 17-0 run gave them a 43-42 lead with 12 minutes to play in regulation.

Rainy River would go back up by three, and still led 58-56 with under a minute left but two free throws from Devin Wade-Henderson knotted the score with 38 second to go, and after a Rainy River turnover the Golden Rams missed a three at the buzzer sending the game to overtime.

Rainy River struck first in the extra period to go up three but an 8-0 Golden Ram run gave Anoka-Ramsey a five point lead.  Rainy River responded with four straight points to get within one.  Wade-Henderson made one of two free throws for a two point advantage but the Voyageurs scored with five seconds left to send the game to a second OT.

In the second overtime, Jacob Say scored on a layup with a minute to play to give Anoka-Ramsey a two point lead, followed by a Voyageur bucket to tie the score with 32 seconds to go.  But Wade-Henderson stepped to the line again after being fouled with three seconds left and made one of two free throws again for a one point lead.  Rainy River managed a desperation three that fell short.

Anoka-Ramsey held a 21-6 edge in made free throws.

In the semifinals, Anoka-Ramsey faced a familiar opponent in Rochester and came away with the 62-51 lead.  The 51 points were the fewest allowed by Anoka-Ramsey all season.

The Yellowjackets pulled with ten on a couple occasions but could get no closer as the Golden Rams advanced.

Free throws again were the key with Anoka-Ramsey making 14 to just 3 for Rochester.

Chapman scored 19 of his 28 points in the first half and added 13 rebounds.  Isaiah Woodstock scored ten points off the bench making 2 of 5 threes.

Anoka-Ramsey would face the #1 ranked team in the nation, Riverland, in the final – and battled valiantly throughout the game.

The second half saw the talented Blue Devils extend the lead to 51-42, but Anoka-Ramsey pulled back within five, 52-47 after a Woodstock three.

Riverland answered with a 7-0 spurt that was ended by a Jacob Say three.  But Riverland rattled off five straight to go up 64-50 with seven minutes to go.

From there the Golden Rams ran out of gas and wasn’t able to put together another serious run.

Riverland shot 48.3 percent overall and made 13 of 31 threes.  Anoka-Ramey shot just 34.4 percent but forced 18 turnovers compared to just eight for themselves.

Chapman and Wade-Henderson were named to the All-Tournament Team.

Anoka-Ramsey ends their season with a 16-14 record.