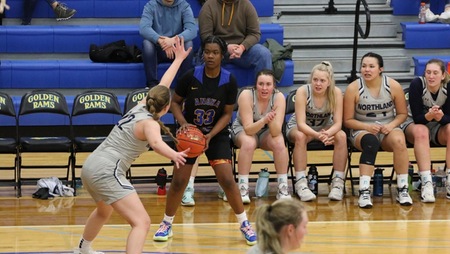 The Anoka-Ramsey Women’s Basketball team knocked off the #2 ranked team in the nation, Northland, 73-70 in the semifinals before falling to Minnesota West 73-69 in the NJCAA Region XIIIB Championship this past weekend.

In Saturday’s semifinal the Golden Rams trailed by six at halftime and by ten with two minutes left in the third quarter before closing the quarter on a 9-2 run to get within three entering the fourth.  CeCe Bell knocked down two threes and Sydney Kehr added another three during the run.

Northland took a five point lead early in the fourth quarter before a three-point play by Kehr and a shot by Demaiyah Hill tied the score at 58 apiece.

Hill added another basket for a two point lead but Northland responded with a three to go up 61-60.  Another Bell three followed by one of two free throws put the Golden Rams back up by three points and Anoka-Ramsey held off the Pioneers by getting key defensive stops and knocking down four free throws late.

Anoka-Ramsey forced 19 turnovers and held a 19-16 edge in offensive rebounds against the taller Pioneers.

Anoka-Ramsey faced the #2 seed from the Southern Division, Minnesota West, in the championship game and led by eight after the first quarter.

The Golden Rams extended the lead to 13 points, 34-21, with 5 mintues left in the half, but the Lady Jays rallied to pull within 43-38 at halftime.

Four straight MN West points to begin third quarter saw the Anoka-Ramsey lead trimmed to just one point.  A three from Hill pushed the lead back to four before a 8-0 MN West run gave the Lady Jays a four point lead.

A three from Hailey Babcock ended the drought, and another Babcock field goal followed by a Bell three put Anoka-Ramsey ahead 54-53 with 2:34 to go in the period.  But the Lady Jays ended the period on a 5-2 spurt to take a one-point lead into the fourth.

A three from Piper Flemming with 2:19 to go gave the Golden Rams a 69-67 lead but Anoka-Ramsey would miss their final seven shots as MN West ended the game on a 6-0 run.

Anoka-Ramsey forced 23 turnovers but were outrebounded 48-36.

Bell and Babcock each added 12 points.

The Golden Rams end the season with a 16-10 overall record.