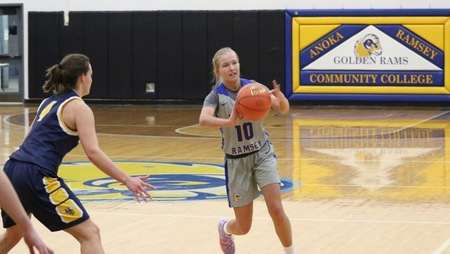 The Anoka-Ramsey Women’s Basketball team fell 59-57 in OT to St. Cloud Tech on a Cyclone three-pointer in the closing seconds.

The Golden Rams battled back from a slow first half, only scoring four points in the second quarter, and took a 36-35 lead late in the third quarter.

Anoka-Ramsey led 43-41 with eight mintues to play in regulation before a 7-0 Cyclone run put the visitors back on top.

Trailing 51-46 with 1:27 to go, Hailey Babcock knocked down a jumper, followed by a CeCe Bell three to tie the score at 51 apiece with a minute to play and that’s where the score would stay into the extra period.

St. Cloud Tech struck first with a free throw but Sydney Kehr made a three to give Anoka-Ramsey a 54-52 lead.  After a Cyclone free throw Anoka-Ramsey went ahead 56-53 following two Lachantice Baggett free throws.

The Cyclones countered with a basket to pull back within one and both teams traded free throws with just over a minute to go setting up the final sequence.

Each team failed to score on their next possessions and a missed Golden Ram three with the shot clock winding down gave St. Cloud Tech one final chance.

Coming out of a timeout the Cyclones knocked down a three with six seconds to go and Anoka-Ramsey missed their final game-winning attempt.

Anoka-Ramsey struggled shooting the ball, connecting on 23.3 percent overall and 6 of 33 threes.  The Golden Rams attempted 28 more shots than St. Cloud Tech thanks to forcing 32 turnovers but couldn’t convert the extra possessions at a high enough rate.

Kehr led the scoring with 16 points, followed by Mikayla Kanenwisher with 15, and Bell had a double double with 14 points and 11 rebounds.

Anoka-Ramsey drops to 14-8 overall, 5-7 in conference games.  The Golden Rams travel to Rochester on Wednesday, February 16.