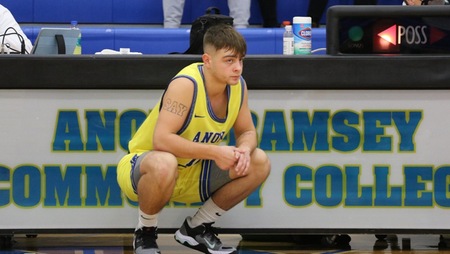 The Golden Rams trailed by 13 at halftime, and by 18 points early in the second half before mounting a comeback.

Ridgewater held a 68-58 with four minutes left, but a layup from Ontario Chapman, followed by an Elijah Mead three cut the deficit to five.

Devin Wade-Henderson scored to make it a three-point game, then after a Ridgewater basket Jacob Say knocked down a three to make it a two point game.

The Warriors responded with a three of their own to go back up by five, but Say had another three and Wade-Henderson scored with 38 seconds left to tie the game at 73-all.

Ridgewater scored on their next possession to go up by two with 14 seconds to play, and Chapman scored on a layup with two seconds left to send the game to overtime all knotted at 75.

The Warriors took an early four point lead in the first overtime, but the Golden Rams went up 86-84 with 1:07 to go.  Ridgewater tied the score with 20 second to play and Anoka-Ramsey missed two chances at the win sending the game into the second extra period.

In the second OT, Anoka-Ramsey took a four point lead only to see Ridgewater score the next five points and lead 92-91.  Ridgewater led by three with 1:41 to go but another Say three tied the score at 95 and that’s where it would stay into the third overtime.

The Golden Rams again went up by four in the third OT 101-97 and the Warriors pulled within one 101-100.  A Wade-Henderson layup and two Say free throws pushed the lead back to five for Anoka-Ramsey with 24 seconds left, and Ridgewater followed it up with a three-point play to pull within two 105-103.  But Roland Washington made two big free throws on the ensuing possession for a four point Golden Ram cushion and Say added another free throw for the final margin.

Anoka-Ramsey held a 71-58 edge in rebounds and made 27 free throws to 18 for Ridgewater.

Anoka-Ramsey improves their overall record to 14-10, and are 7-4 in the MCAC Southern Division.  The Golden Rams will host St. Cloud Tech on Saturday at 3:00pm