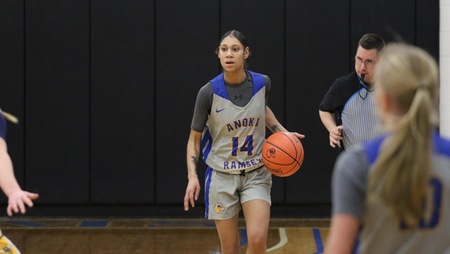 The Anoka-Ramsey Women’s Basketball team got back on the winning track with a 67-48 win over Ridgewater on Wednesday evening in Willmar, MN.

The Golden Rams steadily built their lead throughout the game.  After leading by three after the first quarter, Anoka-Ramsey used a 16-8 advantage in the second quarter to take an 11 point lead into halftime.

A layup from Lachantice Baggett, followed by a three and layup from CeCe Bell, and another Baggett layup extended the lead to 42-25 midway thru the third quarter.

Ridgewater got back within 13 points, but didn’t seriously threaten the Golden Ram lead the rest of the night.

Anoka-Ramsey improves to 14-7 overall, 5-6 in the MCAC Southern Division.  The Golden Rams will host St. Cloud Tech on Saturday at 1:00pm.