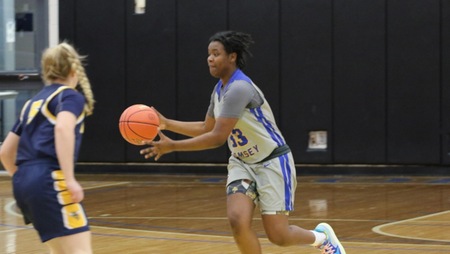 The Anoka-Ramsey Women’s Basketball team hung tough with rival Rochester on Monday night, but the Yellowjackets pulled away in the second half for a 65-45 win.

The Golden Rams trailed by ten at the end of the first quarter but played stifling defense in the second quarter, holding Rochester to just six points as they pulled within one at halftime.

Anoka-Ramsey led 30-29 early in the third quarter before the Yellowjackets went on a 15-2 run over a seven minute stretch and led by 11 heading into the fourth.

The Golden Rams fell behind by 16 points, but put together a 7-0 run to close within nine points.  However that’s as close as Anoka-Ramsey would get the rest of the way.

Fouls once again plagued the Golden Rams, commiting 27 fouls which led to Rochester shooting 19 of 35 from the charity stripe compared to just 7 of 14 for Anoka-Ramsey.

The bigger Yellowjackets also held a 55-33 edge in rebounds while holding Anoka-Ramsey to just 28.3 percent shooting.

Anoka-Ramsey falls to 13-7 having lost 4 of their last 5 games, and are 4-6 in the MCAC Southern Division.

The Golden Rams will travel to Ridgewater on Wednesday, February 9.