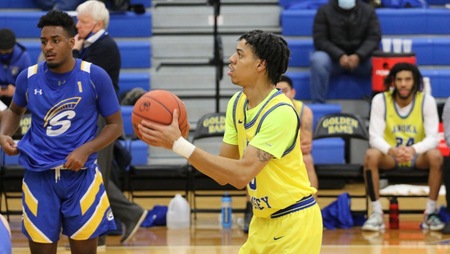 The Anoka-Ramsey Men’s Basketball team hit the 100 point mark for the fourth time this season in a 100-74 win over Minnesota West on Saturday afternoon.

The Golden Rams shot 57.4 percent overall including 9 of 20 three-point attempts in the win, while hiolding the Blue Jays to just 38.9 percent overall and 6 of 23 from three.

Anoka-Ramsey led by 17 at halftime, and used a late run to fend off any Blue Jay comeback attempt.

Devin Wade-Henderson scored 17 points making 7 of 9 free throws to go with nine rebounds, and Daydor Phillips came off the bench for 12 points on 6 of 7 from the field.

The Golden Rams improve to 13-10 overall, 6-4 in the MCAC Southern Division.  Anoka-Ramsey travels to Ridgewater on Wednesday, February 9 for a 7:30pm start.