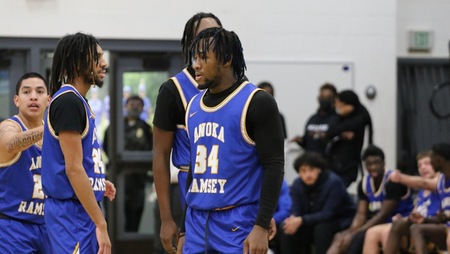 The Anoka-Ramsey Men’s Basketball team built a big lead, then held on to defeat Minnesota West 93-84 on Sunday afternoon in Coon Rapids.

The Golden Rams led by 17 at halftime and appeared poised to run away with the game, but the Blue Jays shot nearly 49 percent in the second half en route to 55 points and closed to within seven points late in the game.

The Anoka-Ramsey size advantage proved to be the difference as three Golden Ram forwards recorded double-doubles.

Anoka-Ramsey improves to 10-7 overall, 3-1 in the MCAC Southern Division, and will host Rochester on Wednesday at 7:30pm.