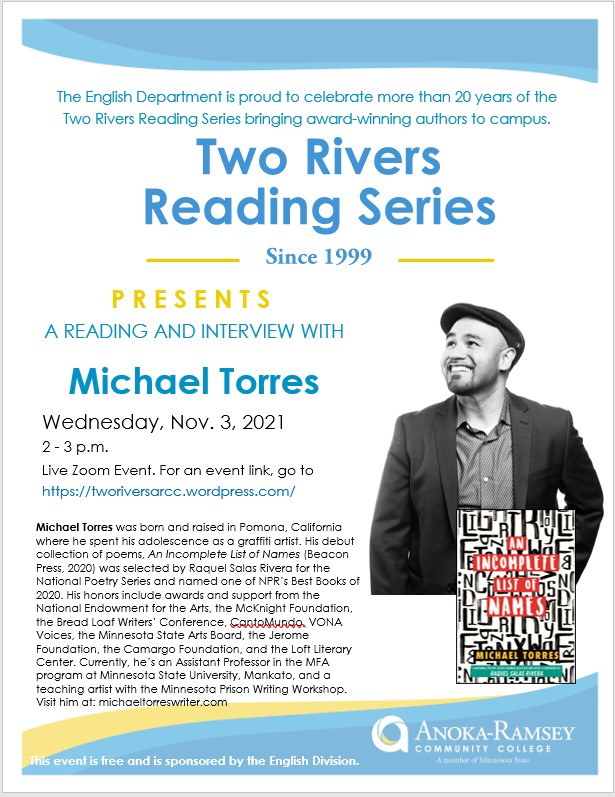 Michael Torres’s poetry collection An Incomplete List of Names expertly depicts what it means to be a Mexican American teenager growing up in the United States. His poems center around his struggle to form his own identity in a country where Mexican American’s wears racial labels as nametags. Torres explores the ideas and ideals of both cultures and the balance that he experienced in his own life. Using literary devices such as intense imagery, strong symbolism, and powerful synecdoche, Torres’s work paints a picture of the violence, friendships, and rebellion from which he truly carves his identity.

In Torres’s poetry the speaker’s voice is often an echo of the author’s past. In the Epigraph of An Incomplete List of Names, “Doing Donuts in an ‘87 Mustang 5.0, after My Homie Chris Gets Broken Up With,” Torres reflects on a particular moment of silent comforting between two friends. Torres writes, “I yell Fuck it/ to whatever I can’t hear him say. And isn’t that why/ I’m here?” (Torres 1). This poem, along with many others uses first person narration to give readers a sense that it tells of true events that have come to past and that have helped shape his identity. Imagery associated with friendship is seen in abundance throughout An Incomplete List of Names. Another example comes from the poem “All-American Mexican” where Torres writes “We are only as young and thuggish as/ America needs us to be. The problem is my/ homies wouldn’t recognize the puzzle my/ body has made of itself” (Torres 87). Perhaps Torres suggests his identity is one defined by an incomplete list of friends.

Torres then introduces readers to the idea of a violence-filled upbringing. He writes in “Down 1” that “By morning, all of us talked/ about the boy who got shot” (Torres 25). Here, he communicates ideas about masculinity and the cultural expectations of school aged boys to be tough and sometimes violent. Torres makes powerful connections between killings and fighting and the idea of a man. He uses imagery to convey the tragedy of children encountering death and being conditioned to respond in a “manly” manner instead of being allowed to grieve or cry.

Torres’s young rebellions also seem to shape his poetry and his identity. Torres, once a graffiti artist on the streets, holds art in high esteem. He writes “holding an empty spray can, traces his name/ on the sky” (Torres 78). Names are a recurring theme in An Incomplete List of Names. We see here that the idea of a name being painted is some form of immortality for Torres. He emphasizes the value of name and its connection to memory and identity.