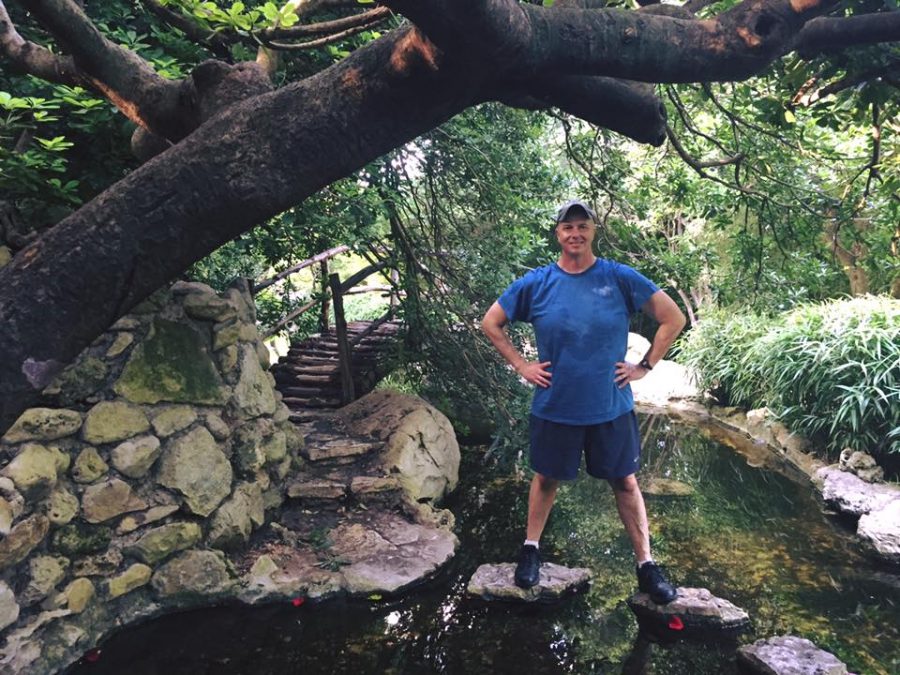 John Herbert at the Zilker Botanical Garden in May 2016. Herbert and Victoria Downey took in the sights before the National Institute for Staff and Organizational Development Conference held in Austin, Texas.

Anoka-Ramsey political science instructor John Herbert died on Aug. 28, at the age of 56. The cause of death is suspected pulmonary embolism. Herbert taught at the Coon Rapids campus.

Herbert was teaching classes at the time of his death. Jeff Edbland, Isanti’s county attorney, took over Herbert’s classes.

“[Edbland] changed the course up because he said he wasn’t going to pretend he knew what John was after in his course material,” Anthony Erickson, a student in American Politics and Government, said.

Herbert was a fan of Monty Python and wise in the ways of science.

According to Herbert’s colleagues, he believed being a good political instructor was about involving his students.

“He wants [the students] to be [their] own advocates,” said Melissa Sollom, a close friend and Anoka-Ramsey psychology instructor. He wants students to ”take a stance in the things you believe in,” Sollom said.

He overlapped his classes’ core objectives with current events.

According to McBride, Herbert’s teaching style was his legacy and footprint to make a change in the world.

“John was the type of person to always look out for the little guy, the person that’s on the bottom of the totem pole. He really advocated for those that didn’t maybe have as powerful as a voice,” McBride said.

Another way he made these small changes on the world was by being Phi Theta Kappa’s advisor on the Coon Rapids campus. PTK is the honors society for two year colleges.

Junita Subanganiraj, Coon Rapids campus PTK’s vice president of technology, said in PTK they learn leadership skills, go to conferences and listen to guest speakers. They also learn how to apply for jobs, write essays for scholarships and how to improve their campus.

Herbert helped out with all of these things. Whether it was providing rides, support, or some other help, he was there.

He was always there. When winter changed into spring, spring changed into summer, summer changed back into winter, and winter gave spring and summer a miss and went straight on into autumn.

A week before Herbert passed away, he sent faculty a slideshow put together by PTK that focused on online learning.  “Our chapter members hope that your students will find the resource to be useful,” Herbert wrote in an email to faculty on Aug. 19.

“He was a great advisor…He was always very supportive of all the ideas we came up with” said Subanganiraj. “He was super understanding of life outside of school.”

Herbert was always wanting to help whenever he could.

“Every time I saw him, he would ask if he could help with something,” said Victoria Downey, Anoka-Ramsey geography instructor.

Herbert’s helping hand extended beyond the walls of campus. When the pandemic hit, Herbert reached out to Sollom as she adjusted to working from home with children. Herbert offered to do a Zoom call with Sollom’s kids while she worked.

“He offered to read a book or something to them on online,” Sollom said. Sollom recounted that Herbert told her, “I could give them a history lesson or something, but they would probably be bored.” Herbert wanted to keep her children entertained and allow her to get some work done in peace.

“When you walked in the door when you turned the corner, you were always hoping John would be there,” Sollom said. Every day she would hope Herbert would be there so she could start her day off right.

According to his colleagues, Herbert got a lot out of helping others on campus.

“He liked people that would keep him grounded,” McBride said. “John is a rule follower.” He was the type “who will never call in sick unless he is legitimately sick and not doing well.”

His actions reflected his character and showed how much he cared about those around him.

“I think there were times he was willing to slightly bend rules to make sure the people he cared and loved and really cherished there on campus were taken care of,” McBride said.

Herbert was kind. He never said a bad thing about anyone. He especially never said “your mother is a hamster and your father smelt of elderberries.”