A tattoo artist finds her way from England to Cambridge, Minnesota. 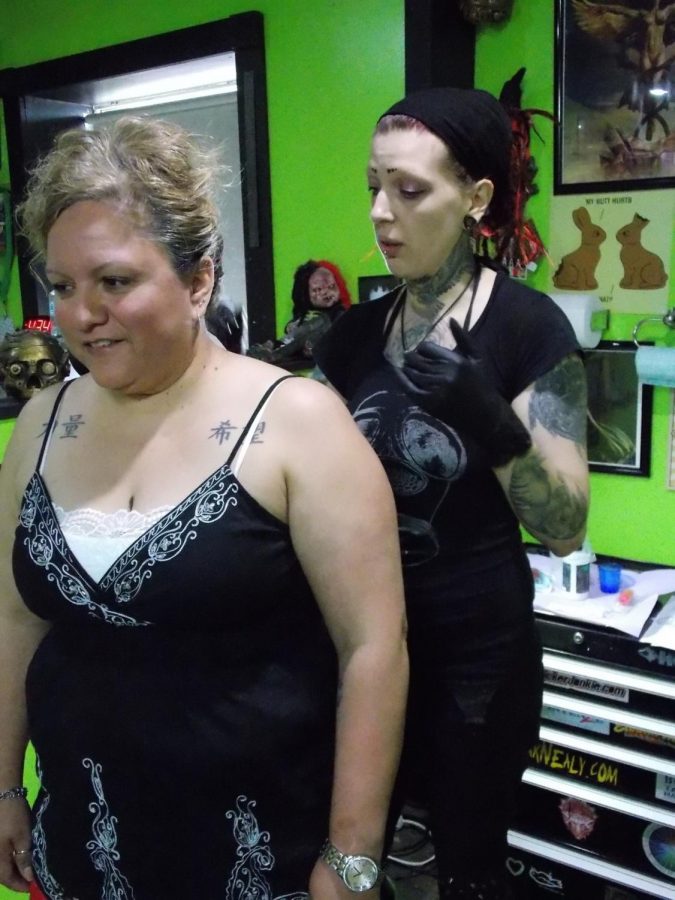 Jak explains her process to Jordan while prepping for the tattoo.

From outside the shop, it doesn’t carry the looks of an ordinary business. However, for a tattoo shop that prides itself on only custom work, who wants anything ordinary?

As one steps passed the rabbit-hole threshold, a shop bell sounds signaling the arrival of the day’s first client. She’s here for a rib piece, but not from Jacqueline “Jak” Nealy, owner of Twisted Image Tattoo. Jak’s client, the canvas she will be etching her creative imagination onto is late—late, late, late.

Fortunately, years of dealing with situations such as this have steeled her mettle into a fine temper of professionalism, forged only through years of experience. Patience is an absolute necessity in the body modification industry.

Killing time as the clock on the wall ticked, Jak talked of past times, breathing life into her story with an air of nostalgia as verbally animated as the smoke puffed out from the caterpillar’s O-ringed lips in Alice in Wonderland.

“People tell you stories when you’re tattooing them, so you get to learn a lot about people—kind of like a therapist, or a hairdresser or whatever. People really open up to strangers, and that’s kind of strange, but it’s pretty special, I think,” Jak said, with her British accent adding to the allure of the tale. One that starts overseas, in Bristol, England, where she was born and raised.

Since an age unknown to even herself, she’s always practiced some craft of creation against a blank and ink-starved canvas—no scrap of paper, no random late-night diner’s napkin went unmarked from her hand.

After turning 18 years old and fresh out of high school, Jak sought out a vocation that would allow creative freedom and be challenging enough to keep her mentally engaged.

Attempts to sign up for college were made in vain, but not from lack of drive or interest, but because she too was late, late, late. However, her timing would later prove to be beneficial, as her informal education in art paved a more traversable path than her former option would take her.

Eventually, divinity intervened. On a whim, Jak decided to get her first tattoo. And after receiving it, an epiphany occurred, sending a ray of guiding light, one less dramatic but as equally important as the beam shooting from the headpiece to the Staff of Ra in Raiders of the Lost Ark.

“That’s it! That’s what I can do, and I can do it better than this guy,” she said, reliving her pivotal discovery with a chuckle.

So, she followed that path during a time in late-90s England when the tattooing industry was a man’s world, and the work of a woman was inferior to their male counterparts.

“It’s changed a lot as far as I know,” said Jak, in an assuring tone of no ill-will.

After enduring the hardship of a long two-year search in her hometown area, like some hard-driven gumshoe from an Arthur Conan Doyle novel, she found the holy grail to her quest—her first apprenticeship.

From there, Jak pursued her profession of the taboo art of body modification, underneath the mentorship of Ben Boston from The Tattoo Studio, eventually inking her first tattoo in 2001.

The name of her shop, Twisted Image, is a considerably fitting jigsaw piece title to her long, winding puzzle-like road from England to Minnesota.

“I didn’t land on Cambridge, Cambridge landed on me,” she said when asked how she came to move to Minnesota.

“And as soon as the people that worked here found out, they actually left here overnight and stole everything out of the shop,” she said with an exhausted giggle.

After that, she laboriously commuted between the two shops, seven days a week, for three months. Perseverance, however, would prove to be the ultimate monkey in her evolution from a child with a penchant for creation to a—literally—world-renowned tattoo artist.

“I got promoted from manager to co-owner to owner in two weeks,” Jak said, creating a black hole of a jaw-dropping pause. “It was the biggest promotion I have ever had in my life.”

Her promotion in 2012, from manager to full owner, was not given to her out of anything but respect. Her widely known reputation is in certain circles, and she has done an insurmountable amount of work on many local Minnesotan talents.

According to Jak, some of her most memorable work has been done on members of the local industrial metal band American Head Charge. From bodywork on Brian “333” Ottoson, who passed away at age 27 in 2005, to founding members Cameron Heacock and Chad Hanks who passed away in 2017 from a terminal illness.

She did the “333” work on the back of Ottoson’s neck, enigmatic numbers with esoteric connections to him before he was swept up within the windy gusts of death’s wings.

“God rest his soul,” she said, pausing a moment to mourn his death but celebrate his life.

Brian’s 3s have since become a testament for the band’s members, past and present, as a memorial to their fallen comrade in music, and Jak has helped them accomplish that by tattooing similar 3s on each of them.

However, working her trade does not solely revolve around the skin of famous bands. Just as the houseful of stories Jak spoke ended, a new one started to build with another ring of the shop’s bell. Her client has arrived.

MJ Jordan comes in with giddy anticipation for Jak’s needled machine and piercingly memorable work for her second time. On this occasion, a blooming red rose covering up a previous sun tattoo. The sun is above a pair of hands making a heart shape that Jak had done previously.

The two exchange familiar discourse. Jak waves Jordan to the back where she will sit vigil on top of a black leather chair, one emanating with the sanitary aroma resembling a hospital.

After the stencils are laid out, Jak picks up her ink-loaded machine and points it to Jordan’s flesh canvas, and begins etching an outline over an old era, not one forgotten, but bettered.

After finishing the outline, Jak begins shading and filling by changing the tip of her machine from a seven needle bug pin to a bit consisting of 15 finer ones, smaller than used for hypodermic and double stacked needles.

As Jak works on, Jordan explains her purpose, replacing the old tattoo with the new one. She says its a symbol her sister and her share together, as her sister has a tattoo similar.

The process takes four hours of enduring pain, but it’s a pain that will only help remember the commitment of self-expression and connection between siblings—a right of passage from one phase of maturity to the next.

Ink drips down as the needles dig deep. Jak wipes away the excess ink, creating swirls of color resembling a child’s abstract finger painting. But as she continues the painstaking process, the discernible image of flowers sprouts from beneath the sea of black and red. A symbol of another time goes into a world of colorful oblivion, and from a simple sun bloomed a rose with an entangling bond between two sisters.