What Used To Be A Man’s World 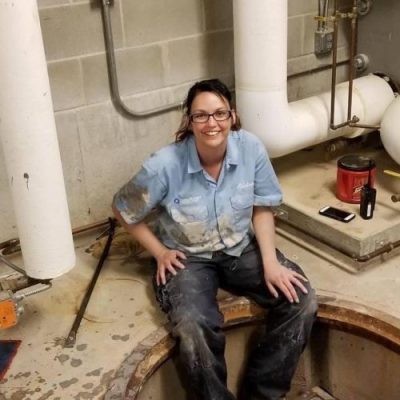 Great individuals are only recognized as such when another person accounts for their actions. When we think of great women in our history, we often think of poets and writers like Mary Wollstonecraft Godwin (aka Mary Shelley); civil rights activists like Rosa Parks and actress Katherine Hepburn; scientists like Marie Curie, who helped develop the first X-Ray machines. But, does anyone think about the achievements of the blue-collar, common-folk women in our history? Not really, as they are a part of a more esoteric and microcosmic group.

There is still a hushed stigma that a woman can’t do everything a man can. However, women are making themselves more prevalent in the “working man’s world,” much like in the 1940s, while men were at war. During World War II, Rosie the Riveter was plastered on advertisements calling upon women to “Do the job HE left behind.” Women’s presence in the workforce rose nine percent during that era as they began to take up drill presses and started to make homes instead of homemaking. 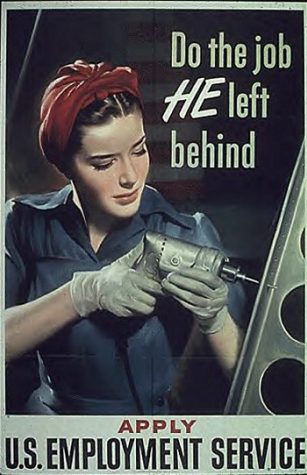 A Rosie the Riveter poster produced by the U.S. government during World War II.

A typical day for Lee is getting up at 5:30 a.m., getting herself and her girls out by 6:15 a.m., and getting to work by 7:00 a.m. After she arrives at work, she goes through work orders, and emails then work on various projects after that. She gets off work at 3:30 p.m. and picks up her girls. Lee then takes them to horse riding lessons or Girl Scouts. After she makes dinner and lunches for the next day, and tries to get homework done sometime during that process.

“Then it starts all over again,” Lee says.

Lee never thought about being a repair worker, though. “I wanted to become a social worker, but when I quit the kitchen, I got hired on as a temp as a janitor. I realized I liked working with my hands and trying to fix stuff.”

What is a general repair worker? On this campus, some responsibilities are to run checks on boilers, big air conditioners, and mechanical rooms. “Lots of checks,” Lee said, chuckling. She also assists with large repairs such as fixing toilets and sinks, painting walls, changing ceiling tiles and lighting ballasts, a device that regulates the amount of voltage and current to a lamp. 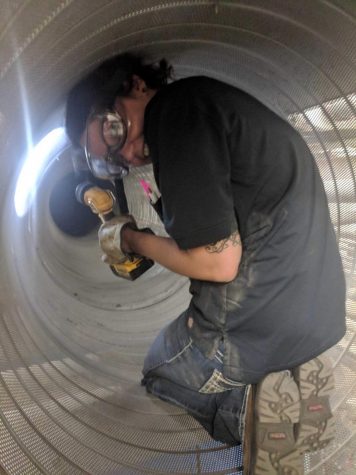 Justin BoekeChelsey Lee cleaning the inside of a vent above a boiler at the Anoka-Ramsey Community College, Coon Rapids.

The heating and cooling software is one of the more difficult parts of Lee’s workday, “I’m not good with that program. It’s a lot of numbers you have to remember. Its something I’m not catching on as fast as I would like to be.” Installing emergency lighting ballasts are tricky. An emergency ballast is the same as a regular one but with a backup battery.

“It is a lot of wires in a small space. Some of them are wired differently. And it can take anywhere from 15 minutes to an hour to an hour and a half. It all depends on the wiring.” Lee lamented.

The requirements for becoming a general repair worker are HVAC (heating, ventilation, air conditioning) training and having a boiler’s license. No experience is necessary, but it is helpful.

Her work is not only tricky but also dirty. The dirtiest job she performs would make Mike Rowe from Dirty Jobs proud to make an episode about. She has to clean the clay pits in the Visual Arts building annually. “It’s slimy. It’s stinky. It’s like taking a clay bath.”

But Lee has a motto that she expresses whenever a job is complicated:

Lee isn’t intimidated by her work’s challenges. Lee shrugs and says, “It really hasn’t been that hard. I was always a tomboy growing up, so I was around guys more. I’ve always had more guy friends than girl friends. I’ve always been more in a man’s world.”

In her boiler training class, there was a limited amount of other female classmates. “Zero! I was the only one. So, I felt like I had to prove myself even more,” Lee exuberantly said.

Her work doesn’t come without risks. In November of 2017, Lee fell down some stairs in B235, a lecture hall, and injured her tailbone. “When I got to the bottom. I grabbed my radio and phone. Stood up said I was good. I remember tripping twice, then grabbing my coworker’s arm.”

The next thing she said she remembers is waking up to nursing students looking at her while she regained consciousness.

“I came back to work the next day… I got a donut to sit on,” she laughingly said, “Which I refused to sit on. Because it made the injury worse.”

In true Lee fashion, she got back to work the next day.

“Her working as soon as she was cleared by a doctor is why she is so highly regarded and respected as a fellow employee,” said Jeff Bradway, coworker, and friend of Lee, in an email.

Lee not only has support from coworkers but also her boss.

“I’m a very protective person and a bit old fashion. I view some of our younger staff as my kids, and it bothers me whenever one of them gets hurt or in any kind of trouble (if this were to occur),” said Director of Facilities Ken Karr, her supervisor, in an email.

Employees of the State of Minnesota accumulate sick time. During the first five years, a general maintenance worker acquires  four hours of sick time per pay period. Lee has been employed by the State for about six years. Yet, she chose to go back to work the next day. How many people are out there that have the opportunity to take time off, but instead come into work the next day? 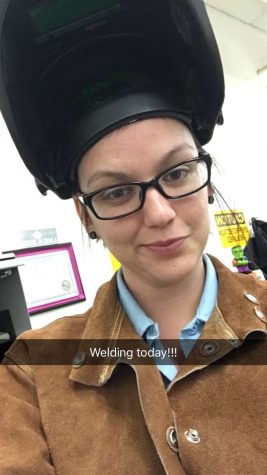 Aside from work, Lee is pursuing an associate’s degree in business administration and has aspirations of obtaining her chief boilers license in a few years. When she is done with college, she wants to keep climbing in facilities. “I don’t really see myself going anywhere. I am a lifer. I will go as far as the college will let me.”

“Her limitation is only set by herself assurance or self-doubt. If she can get rid of her own personal self-doubt, there is no limit to what she can do. She is her own barrier to her own limitations,” said Building Maintenance Foreman Dave Madden of Anoka Technical College.

The definition of pusillanimous means showing a lack of courage or determination; timid. The common slang term for the word is “pussy.” If there is one word that could never be associated with Chelsy Lee, it is both the aforementioned full and slang term of pusillanimous.

One could tell men to ball up and gain some sort of misconceived machismo that often associates with being a man. But when it comes to Lee, not having any kind of male reproductive system and still doing more than what a man does in a man’s job, one can only say brass up and gain some guts.

So, brass up gentlemen. The 1940s weren’t a fluke. Your careers are endangered by the opposite sex, and they’re willing to do the jobs YOU leave behind.