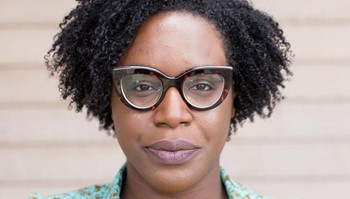 A review of “What It Means When a Man Falls from the Sky.” The author Lesley Nneka Arimah was the guest author for this semester’s Two Rivers Reading Series on the Coon Rapids campus.

When was the last time a man was seen falling from the sky?  One might ponder this question while reading the title of Lesley Nneka Arimah’s “What It Means When a Man Falls from the Sky.”  Arimah’s comedic style makes her literary fiction extremely engaging and addictive, demonstrating unique forces that bond and disconnect people in familial and romantic relationships.

Across all 12 short stories spanning the 230 pages, set in Nigeria and the United States, there are similarities in the content’s hilarity and recurrent theme of connections and disconnections in social relationships. 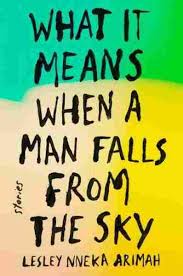 Such strong emotions—love, acceptance, and resentment—are expressed as each character’s survival is tested.  Enebeli Okwara and his daughter grow closer as they make the best of their lives together during his wife’s physical absence in “Light.”  Jealousy, betrayal, and misunderstandings—fatal weakness traits that separate Mayowa from her friends and involved families—are the root causes of disconnections in “Redemption.”

Arimah’s incorporation of humor; different story elements such as realism, myths, and magical realism; and her focus on feminine perspectives make “What It Means When a Man Falls from the Sky” as diverse as effective in captivating audiences.  In doing so, uncomfortable topics are easier to discuss.  The opening story, “The Future Looks Good,” provides an ideal direction for how subsequent stories would be guided.

“Her grandmother, overworked to the bone…whose children’s asses she scrubbed clean…sees her son to his thirteenth year with the perfunction of a nurse and dies in her bed with a long, weary sigh.”

This story is an eye-opener for anyone fortunate enough to have never witnessed the complexities of dysfunctional relationships.  Most of the protagonists throughout the stories are women, making this collection heavily female-focused.  To defy traditional devaluation of females’ voices, Arimah has empowered women and girls to be steadfastly firm in self-expressions.

The second story, “War Stories,” ideally should be moved towards the middle of the collection.  While its inclusion proves advantageous in revealing the disadvantages of close relationships, it is somewhat a mood-spoiler following a provocative first story.

“My mother pinched her nose…I could tell by the way her left shoulder hunched forward…She remained polite to Anita’s mother but her glare seared holes in me.”

Mature audiences will appreciate and tolerate the occasional slang and sexually-charged language in Arimah’s literary fiction.  Nonetheless, more restrained individuals might find the profanity moderately offensive.  But don’t be steered away; Arimah’s light-hearted approach will make any reader unable to repress some good laughs. Open up this book—and there certainly will be an entirely new interpretation to “What It Means When a Man Falls from the Sky.”

Clara Mai is a student at Anoka-Ramsey Community College where she is earning her A.F.A degree in Creative Writing.