Much Ado about Nothing — Except Enjoyment 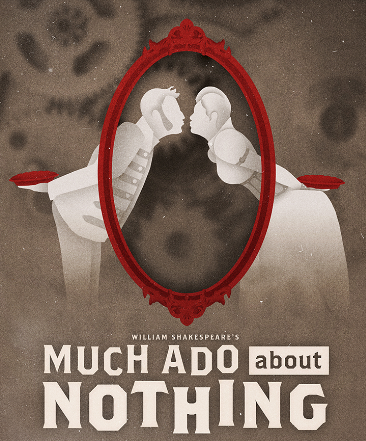 The Anoka-Ramsey Theatre Department is currently in production of their second play of the spring semester – William Shakespeare’s comedy “Much Ado about Nothing”.

In this comedy, Hero, played by Caitlyn Sparks, and her groom-to-be, Claudio, played by Chase Siegfried, collaborate with commanding officer Don Pedro, played by Luke Martin, to hatch a matchmaking scheme prior to their wedding. They target Benedick, played by Jim Belden, and Beatrice played Tricia Burke. It is known to be a tough task because both are sharp-witted, greatly detest both love and each other. A lot of gossip and meddling from a variety of characters complicates everything.

Director Blayn Lemke’s take on this Shakespearean comedy has the audience take to the stage. This is the third play that Lemke has directed where the audience gets to experience the action up close to being seated on stage. In addition, some lucky members of the audience get to become instrumental helpers in the scenery too. Lemke seems passionate about this type of play performance.

He states, “You can’t fake it when you’re this close.” The performers get the opportunity to not only master the words of Shakespeare but also the confidence of being only feet from their audience too.

The comedy, set in 16th century Messina, Sicily brings the audience back in time with a simple set, time-period style clothing, while the director’s choice to also include steampunk accents adds a contemporary modern sensation. The jazz-funk music by Lettuce, proposed by a student, allows the dancing in the play to continue with a contemporary modern revamp.

“Much Ado about Nothing,” directed by Blayn Lemke, is a great experience. It will revive the audience’s passion for theatrical comedy and jump back in time with a fun twist. Performances will continue April 19, 20 and 21 at the Coon Rapids campus in the Performing Arts Center. Students can receive two free tickets to enjoy this comedy.