“Win or Lose, Every Season Has to Be Celebrated” 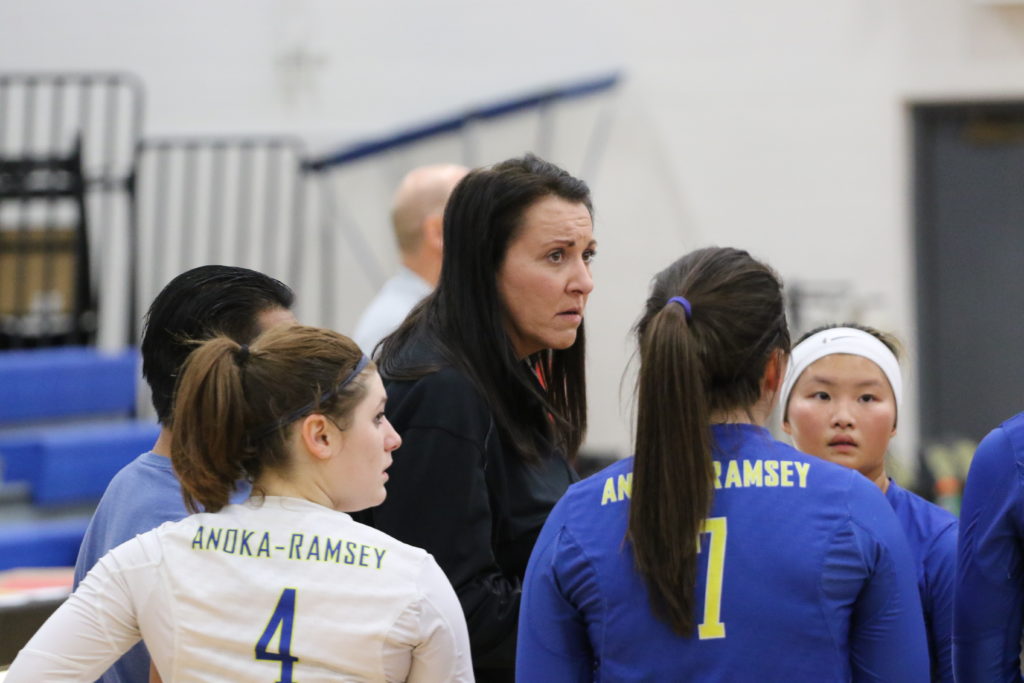 Coach Herlofsky taking a moment with the team during the volleyball season.

Michael Nguyen, Staff Writer.
On October 27, 2017, the Anoka Ramsey women’s volleyball lost to Western Technical College, completing their winless season under first-year head coach Sarah Herlofsky, with a 0-27 record. Even with the losing record, Coach Herlofsky has high hopes for the future of the program and hopes to bring a new culture of winning to the Golden Ram’s volleyball.

Herlofsky is no stranger to the sport of volleyball as she says, “Volleyball has been my life.” Herlofsky is a Columbia Heights, MN native, who played on a very successful state championship high school team. The next stop for her was Division I Women’s volleyball where she played for The University of North Carolina. Herlofsky started coaching her last year in college in 1996 and has coached almost every year since.

Joining the team in late April set Herlosfky in a difficult spot, as most of the recruiting was completed the previous fall. One of the biggest struggles for the first-year head coach was fielding a full team. “I had no clue what to expect. I came in with what we had and had to do some scrambling to fill a roster,” Herlofsky reports. Herlofsky’s goal was finding a group of young women that had a love for the sport and who wanted to be dedicated to the team. She admitted to coaching more laid back then her preferred coaching style, “I want the women to continue to want to stay and play, I couldn’t risk having anybody leave.” With the first season under her belt, she will be looking to push a little harder.

Heyrovsky hopes that playing volleyball for Anoka-Ramsey will be a stepping stone for student-athletes who hope to play Division III or Division II, possibly even division I. She acknowledges that recruiting will be very crucial in her future success. She will expand her recruiting to areas such as Minneapolis and St. Paul, hoping to show volleyball players all that Anoka-Ramsey has to offer them as student-athletes.

For Herlofsky, this season was not a failure, despite what the record might look like. She was very proud of the way her team represented themselves, always staying positive. The first year was a learning experience for first-year Head Coach Herlofsky, who is not accustoming to losing as the Golden Rams did this year. Even with the losing record, Herlofsky wanted to relay, “Win or lose, every season has to be celebrated.”

Herlofsky hopes to continue bringing positivity and a winning culture of Women’s volleyball to Anoka-Ramsey.